There are two major categories of research I believe that writers need to spend time on.

First, the most obvious, is research relating to the story being written.  A lack of understanding and knowledge about the selected era, location, subject matter and characters of a story will quickly show.  For this category, I will dedicate a future post.

The second category is where I want to share insights that I’ve recently gained. The script is merely one of several critical pieces to putting together a great film.  As a writer, you have probably consulted dozens of books, articles and seminars on how to write a great script.  You’ve probably been told that the script is the foundation of film.  The importance of character, conflict and story has been drilled home.  Perhaps you take this at face value and work to make a great script.   But imagine you also explore the other pieces and roles in film making to gain perspective.

This is something I have been doing recently.  I have found it very valuable.

The first thing I did was take an introductory acting course at a local acting studio.  I was fortunate enough to have a Living Social deal come across my Inbox for “Acting for Non-Actors.”  It was a four week course, one 90-minute class each Tuesday night, at the Bay Area Acting Studio in San Jose.  Not really sure what to expect, I was still surprised at the great turn out as well as the diversity of students (age, background, nationality).  Most students were just out to try something new, and a handful were people with previous or current interest in filmmaking roles.  I was the only person self identifying as a hobbyist/aspiring screenwriter.  I soon learned that at least one other student had also shared the interest.  About 2/3 of the class time was spent on games/drills that were pretty fun and effective at bringing up the energy and drawing out the more introverted people of the group.  The other 1/3 of the class was spent on very basic Meisner technique and scene work. I have signed up for the next section called “Acting for Fun” to continue gaining the actor’s perspective.

So far, from just a few classes, the main lessons from this experience, as a writer, were:

1) A speaking character must know who/how/where she or he is focusing their attention and energy. Be clear in your writing.

2) The character really must be unique enough that an actor can channel and use the particular relatable parts of themselves.

3) The dialogue must not get in the way.  Keep it simple.  An actor can do a lot with a few words.  Trust them to communicate the ‘real story.’ Do not write out dialogue that really should come from subtext.

4) If you are doing a good job with the characters and story, you will also reduce or eliminate the need to direct from the page.  That is, fewer movement action lines and parentheticals will feel necessary.

5) Make your characters such that actors *want* to play them.  Boring (e.g. no personality, no voice) or vague characters (e.g. no real conflict or struggle) will not be educational, pivotal, defining or motivating – they won’t be exciting to study and portray.

The second step I have taken, is to enroll in the Intro to Film class at local DeAnza Community College.  DeAnza is especially recognized in California for its Film/TV program.  The tuition is affordable, and the schedule provided several options, including the evening section that I selected.   While only a couple of weeks into the class, I have already developed greater appreciation of a great foundational script. Casting, location selection, props, scene framing, camera work, actor positioning – all of this can help tell the story.  But the characters and story have to be strong enough and clear enough to allow these important pieces to do so.

If you haven’t already educated yourself about these aspects of filmmaking, I encourage you to do so.  There are a couple of books on my shelf that are great references, and also, one of my course references is the publicly available Yale site on Film Analysis. The textbook for my class is Looking at Movies.

I assure you will watch your favorite (and despised) films with a new perspective in what makes them great or miss the mark.  It will challenge you to look at your writing with a critical eye for what is needed to turn your story into reality.

What other steps have you taken to gain perspective about the other roles in filmmaking and the importance of the script outside of the writer’s view? 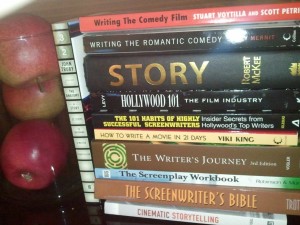 I love books.  One of my absolute favorite things to do is to wander through our local independent store – Third Place Books – or even a chain like Barnes and Noble.  A latte in hand, meandering, soaking in all of the cover art and titles of hundreds of books.  The knowledge to be gained, the stories of wild imaginations and laughs waiting to be made. I also love the newstand section – layers and layers of glossy colorful magazines with that magazine smell, the gifts section with amazing journals and stationery. I also love libraries – especially University libraries.  I relished every research paper assignment in all levels of education.

Anyone close to me knows that I have a bit of an obsessive streak that runs through me.  Last fall when I decided to take on coaching basketball,  my first task was to order a few books online.  Then I ordered all sorts of coaching and practice aids.  I spent hundreds of dollars and dozens of hours reading and preparing – to coach 8- and 9-year-olds. I had coached before, but that was over ten years ago and the girls were more experienced and easy to manage, being in the sixth grade.  This is what I do; I throw myself completely into things and obsess over every detail.
So, naturally, within a week or two of deciding that I wanted to put the effort and energy into completing and editing the script I had been writing, I ordered a half-dozen books.  Then, as I read the forewords to those books, and received recommendations from people ‘in the biz,’ I added several more.
In case you can’t quite make it out in the photo, the titles are:
Left:
John Truby – The Anatomy of Story: 22 Steps to Becoming a Master Storyteller
Top to bottom:
Stuart Voytilla and Scott Petri – Writing the Comedy Film: Make ’em Laugh
Billy Mernit – Writing the Romantic Comedy
Robert McKee – Story: Substance, Structure, Style and The Principles of Screenwriting
Fredrick Levy – Hollywood 101: The Film Industry
Karl Iglesias – The 101 Habits of Highly Successful Screenwriters
Viki King – How to Write a Movie in 21 Days
Christopher Vogler – The Writer’s Journey: Mythic Structure for Writers
Jeremy Robinson and Tom Mungovan – The Screenplay Workbook: The writing before the writing
David Trottier – The Screenwriter’s Bible
Jennifer Van Sijll – Cinematic Storytelling: The 100 Most Powerful Film Conventions Every Filmmaker Must Know
Finally, not pictured, as it’s in my purse for on-the-go-reading – Blake Snyder’s Save the Cat!
Now, you might be asking “but did you really read all of those, cover to cover?”
I was surprised, in looking at the stack, that there are really only two books in the stack that I haven’t read – Anatomy of Story and The Writer’s Journey.  I’ve really only skimmed the workbook and ‘bible’, but the rest I have read completely.
The first (and often only) book I mention, when asked, is Story.  It is thorough, has just enough detail but good flow – you can cruise through it and also learn a lot.  Remember that I have never had a real creative writing course, so some of it described The Basics, but it covered those in a fun and engaging way.  I find myself going back to it, at times, when trying to get through a mental block.
My favorite book to pick up and thumb through, even though I’ve read it a couple of times, is the Cinematic Story Telling.  The large format and plethora of pictures open your eyes to so much about what visually makes us love films and recognize a great one when we see it.  So many “ah-ha!” moments when you connect what you learn with movies that you just love to watch.
There are numerous books on writing romance, but only one or two, that I have found, that add in the comedy piece.  The one mentioned here does a pretty good job explaining how two genres come together to work well.
I wouldn’t have normally picked up the too-good-to-be-true 21-days book, but it was one of those unlikely recommendations in the foreward of another book, so I picked it up and found that I appreciate it providing basic structure to a very creative effort.
Each of the “tips” type books also had various golden nuggets.  And golden nuggets are things you need to appreciate, reading multiple books, because there is a lot of repetition and overlap in the books, but sometimes an author will express something in a new way, or use a film example more effectively, and the light bulb goes on.
I’m currently really enjoying the direct and humorous Save the Cat! and will follow up once through it, as well as the other two books.
– April