People have a variety of methods that they use to familiarize themselves with the unfamiliar. For me, my first step is often seeing how others have done it. Screenwriting has been no different.  I choose to read scripts for movies that I’m fairly familiar with.  Here I will describe the hard copy screenplays in my library (I have dozens more in soft form, more on this later), and what lead me to plucking them out of the script bin for study. 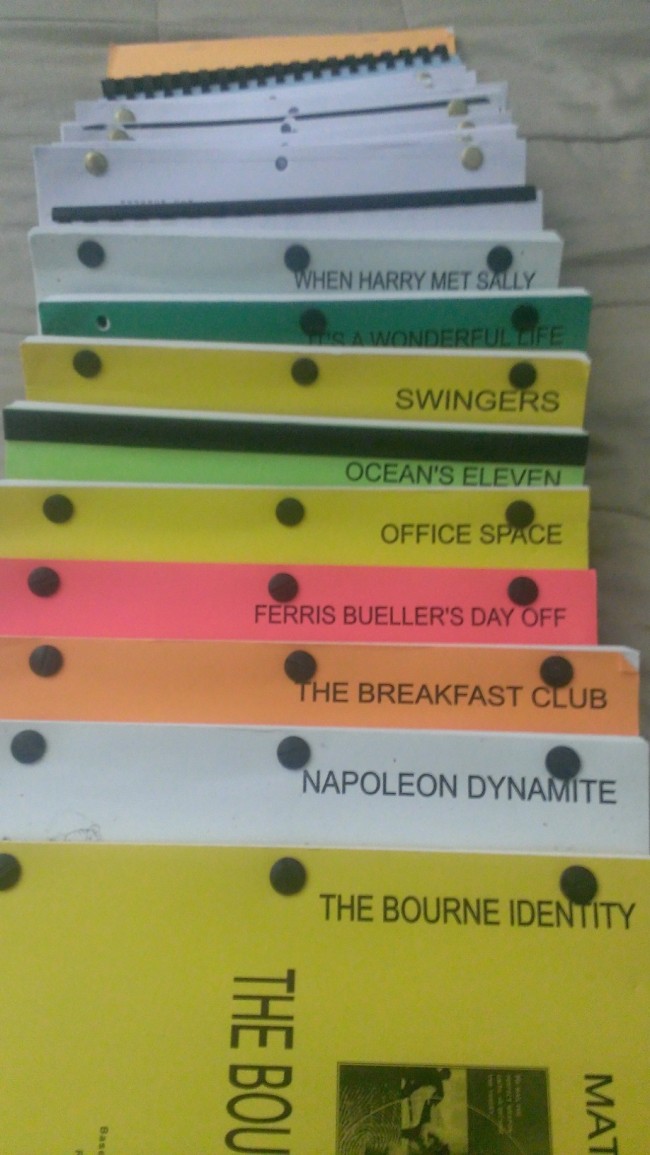 These are listed in no particular order, only categorized with a quick snip of the category and the reason I thought the example was relevant. You’ll see some entered in more than one category.

Timeline
These stories have some interesting aspect to them with regards to the story timeline.  For example, Ocean’s Eleven. If you don’t already know, this is a fun heist story where the audience follows along curiously about how the crew will pull it off given the comprehensive security around their target. After recruiting for all of the different roles, it is revealed that the leader, Danny Ocean, isn’t just in this for the loot – he wants revenge and to win his ex-wife, Tess, back.  After convincing the crew that this won’t jeopardize the operation, the heist gets back underway.   The reason I loved reviewing this script for timing was that  the key part of the movie – the heist itself – takes place over just a few minutes and is done without completely confusing or losing the audience. I thought this was a rather interesting writing challenge.  Similarly, I’m looking at these scripts for timeline challenges:

Being my primary genre for writing, I picked a few well-loved examples. Most stories have a romance plot or sub-plot, but the light-hearted romance is as difficult to write as a complex song in Major keys.  The first is listed often not just as a popular romance but as the best written movie of all time. I think romantic comedy is especially challenging because there is an audience mandated outcome, yet that outcome must be delivered in an unexpected way.

What’s great about the Ocean’s Eleven script – and I would love to see the original script to see if this was something carried forward or recaptured –  is that it has an old style dialogue, especially between Danny and Tess.  One of my favorite sections of dialogue is in the restaurant when Danny approaches Tess while she waits for Terry. I started to put a snippet here but I think I’ll wait for a full post on the script for that.  It’s for similar reasons I love Casablanca.  Prime examples of accomplishing the most bang with the fewest words. It’s an art, for sure. When Harry Met Sally also features some simple and effective dialogue. I think they call this efficient dialogue in writing circles.

The following are a mix of genres but all present a fantastic exploration into one or more characters. Some even surprise us in the end – for example Ferris, seemingly a teen punk, and may normally be, but in this story a caring friend who just may have saved his friend, Cameron.  Others feature every-day people that help us learn or once-again recognize something about ourselves.

I never appreciated good comedies more until I tried to write comic aspects into my script. I’m still trying to address comments that my story needs to be ‘funnier’!

A few others already mentioned like Ferris Bueller’s Day Off and The Hangover, are good to study for their comedic elements as well.

I hope this has helped trigger some ideas for movies to look study for certain aspects of screenwriting.  Next I will blog some great sources of scripts that I have found.