One nice feature of screenwriting software is how it can aid in tracking scenes – allowing scene-specific text, providing scene reports and even providing the option to print scene cards.  Scene cards allow you to look at the flow of the story, reorder, remove and find gaps.  I have typically used hand-written index cards because sometimes the scene information that is automatically included in the software card isn’t clear enough (and usually I didn’t manually enter enough information to be helpful). I’m sure that all roles involved in film rely on the scene cards a lot, but I am focusing on the writer.  This writing tool would likely be useful for playwrights and novelists, as well.

Recently, I started using this tool again for my current rewrite.   First, I ran through my script and marked all of the scenes and numbered them.  Second, I made a card for each scene, then grouped them by storyline. This was hard at times because most of my storylines are fairly intertwined. 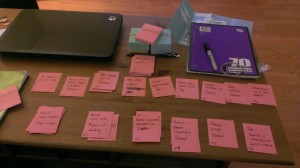 Next, I marked each with a ‘-‘ or ‘+’ for the change in the main character (of the storyline) energy/emotion charge of the scene.  If there wasn’t one, I marked an ‘o’ – knowing I’d probably need to remove, change or replace the scene.

Later, I took advantage of the large tables at the community center, where my daughter is taking a class, to lay out the storyline cards. I made storyline “header” cards, in green.  I then faked a timeline, and spaced the cards according to time passing.

This exercise helped locate several issues and opportunities for different flow.  As I walked through the sequence, I started eliminating cards, marking some for edits, and putting in new placeholder cards (yellow). To preserve the timeline, I made purple cards to demarcate time (Day 1, Day 2, Week later, etc), and then stacked the whole story up in the new order.  On the back, I noted the new order number.

Today, I’m now using the cards to make modifications in Final Draft.  Some scenes are just placeholders, to be written after the restructuring. After I do the writing edits, I’ll do an overall analysis and check the state of the rewrite.

I recommend this exercise, it’s been very useful.